July 25, 2013 – I’m not officially tired yet of all the Royal baby media coverage, but I’m rapidly approaching saturation. I think the tipping point may well be a Globe and Mail article in which Amber Daugherty breathlessly reported on the first faux pas of the new parents. This is what passes for news in “Canada’s National Newspaper”? It was reassuring to see in reader comments that the vast majority felt that the reporter and the Globe should, how shall I phrase this charitably, put things in perspective and get a life. 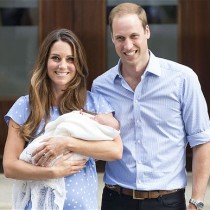 I do have, however, like to think that I have a professional interest in the matter. I’m intrigued and impressed by the communications strategy surrounding the whole royal birth thing, certainly in the last few days. I have to think that someone at Buckingham Palace and/or Kensington Palace did some deep thinking through how to handle the media onslaught surrounding this royal birth.

It’s a difficult situation because this is not yet a repetitive exercise. If William and Kate don’t get it right the first time, they can’t go back and re-do it all. Whatever they say and do about this royal birth has to have the right tone and style immediately, otherwise commentators will jump all over them (see Globe article above). So it’s been interesting to see how the family has handled the media, from slipping in the back door, pre-birth, unobserved to emerging from the front door, post-birth, and coolly answering a few new-parent questions from content-starved journalists and image-starved photographers and camerapersons.

Someone once observed that journalists are like sharks, you have to give them something to eat every day. Since the birth, that’s been the case with, first, the news of the birth, then the first pictures of the new royal addition, then the formal name, information all revealed on a daily drip-by-drip basis. Who knows what tomorrow will bring? It’s a savant blend of offering just enough new information and/or images to satisfy media lust while also retaining some control of the story.

We all know that it’s easier to establish a good brand than it is to repair a damaged one. The communications thinking behind the royal birth has been pretty good so far in establishing that “royal baby brand”. There does seem to be a genuine likeability about the whole thing, a warm and fuzzy buzz that surrounds not just the birth of any child but one born into such celebrity. Of course, it helps to have attractive parents who seem to “get” the balance between presenting royally and appearing just like many of us once were: young, first-time parents tip-toeing our way through the early days of child-raising, mindful of all the advice we were getting but determined, nevertheless, to do it our own special way. We didn’t have communications strategists advising on how to seem and be, it all came naturally. Let’s hope that continues for this royal couple and their newborn.